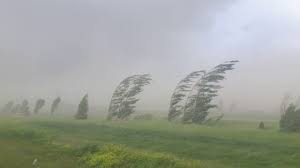 On December 30th and thirty first, there was a raging wind storm that rushed through northern Utah. This storm blew snow onto the roads, and tore apart roofs, and ripped out trees. This wind storm sent freezing gust of wind causing temperatures to plum it. With this wind and blowing snow, this caused road to become very icy. Which caused lots of commuting traffic, and there were also lots of wrecks.

The icy roads made it harder to commute, and also a lot slower. many drivers decided to stay of the roads for safety. along with the ice, there were very high wind that would push your car on the ice.

The High wind also caused it so that they were making semis pull over to the side of the road, so that they could prevent them from tipping over. These wind were pulling out trees and bushes. making a mess of everything.

“I woke up at 2:30 because my fire alarm was tripped and I went upstairs to get my dad and looked out the window and a panel from the roof above my deck was ripped out and flying around my deck.”

That just shows you how hard the winds were actually blowing. These winds started blowing in the night and continued to blow throughout the night.

Luckily this wind storm did not get to bad. and did not compare to the wind storm from a couple years ago, that tore every ones roof apart and ripped out huge oak trees. This storm just shows us that you can never expect what can happen. things are going to come out of nowhere.