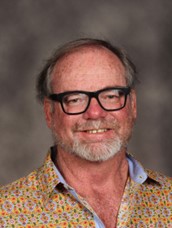 Michael Navidomskis is a history teacher at Davis High School, and this is his last year before retirement. In his youth, Navidomskis moved around a lot, but sports were always an anchor for him with his father being a coach.

Navidomskis has taught at Davis for 29 years. The best part of his job for him is his students because he loves to talk with them. Navidomskis’ love of travel and desire for exploration is the driving factor behind his departure.

“I’m having a hard time letting go because I’m enjoying myself. The number one reason (for retirement) is that I have so much to do, I have to do it before I die. My desire to travel, having this job prevents me from doing so.” says Navidomskis.

Even though he has visited 86 countries all over the world, Navidomskis says he has at least that many more he would like to visit.

In the classroom, Navidomskis has a contrasting teaching style compared to other teachers at the school. While teaching his lessons, Navidomskis makes sure to include life lessons that prepare students mentally for life’s struggles. His purpose in teaching is to make students stronger.

Navidomskis, with his diverse background and extensive experience with the world, has had many opportunities in many different career paths. But being an educator is where his heart is at.

“I had a number of opportunities that would have caused me to be wealthy, but the choice I made to be an educator has made me realize that I am the richest man in the world, and that there is a difference between wealth and riches.” states Navidomskis.

Navidomskis’ humble and accepting view on the world is where his best advice for students comes from. He doesn’t sort his students by categories or beliefs, instead he sees them all as human beings.

“We are all exactly the same, there are no categories, nobody should be relegated to anything, that we are all on the same team and benefit from each other’s help, and no matter where I go, everybody is exactly like me, they want the exact same things as I want.”

With this piece of advice for current and future students, Navidomskis will be leaving at the end of the 2021-2022 school year to go skiing and enjoy the world with the people around him.