The Superheroes of Davis Work Hard in the Special Ed Program 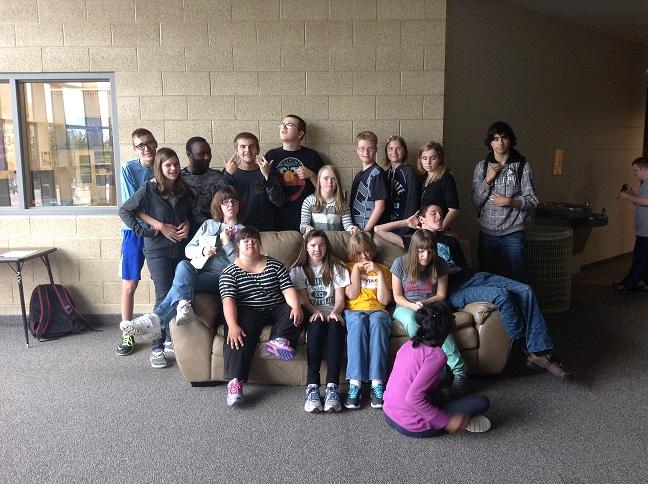 Jay Lyman, that red-haired, freckled brother of mine, stated, “Nobody is normal, everybody’s extraordinary.” Everybody’s different, and that’s why the world’s so interesting. Some kids are more different than others, and it’s those special kids that I want to address today.

For as long as we can remember, “Special Needs,” has always been a phrase to be avoided, as much as the actual kids themselves that are described in this way. Special Needs is almost a ‘taboo’ phrase and a topic that nobody wants to discuss. “These are just kids, kids that feel and love and want to be accepted as much as everyone else,” stated Jay Lyman.

The Special Ed program at Davis High is intricate and dedicated to the welfare of its Special Needs students. Mrs. Rhoni McKay, the Functional Skills teacher stated, “The focus of a high school Special Ed program is getting them ready to transition to adult life.”

Depending on the severity of a student’s mental handicap, these students may take normal classes, with the help of their peer tutors. McKay, also the head of the Peer Tutor group stated, “If you’re a peer tutor, you can do one of three things primarily. You can be in our classroom helping us run class, you can be asked to go to a mainstream class with a student with a disability, or we even have peer tutors that go out to job sites with our students.”

Some Special Ed students actually walk to nearby businesses and learn to work a job during school in order to receive school credit. McKay commented, “The students have a period in their schedule that is a job site. They go every eighth period to Dylan’s and they work, or they go to Taco Time and they work.”

Payton, a Special Needs student here at Davis High, told me about his job site; “I work at the Enrichment Center. I work with the little kids.” Payton’s favorite class is Seminary, and his favorite food is pizza. His favorite color is red, and he loved attending and supporting  the school football games this past season. He was a huge help to the football team; he handed water to them when they came off the field. He cheered them on all season, for which they are grateful.

Dustan, another Special Needs student, says his favorite thing to do is “hang out with my girlfriend.” He loves school, because he gets to “chill” with his friends and girlfriend. His favorite color is blue, and his favorite food is spaghetti and breadsticks. His favorite class is Seminary, and for his job site he works at Dylan’s. “I help them pick up stuff and clean tables,” he said.

Tressa, a pretty brunette and Special Ed student, said, “My favorite colors are red and black.” She also remarked, “I like to sit on the couch and watch movies. I like to play baseball, football, and volleyball. My favorite food is spaghetti and pasta.”

McKay stated concerning the acceptance students give Special Ed students at Davis, “And then, not only if you’re signed up for a peer tutor can you help them, but if they’re in your class, otherwise, we find a lot of kids will help them.”

However, McKay has noticed that these kids don’t get invited to a lot of social events. She stated, “My dream world would be if they were asked to do more things socially with people. If people were asking them to go to the games, or whatever; because they like that kind of stuff just like anybody else.”

McKay also advised, “I always tell my peer tutors just to treat them as close as possible as you would anybody else.”