Freedom for their spirits 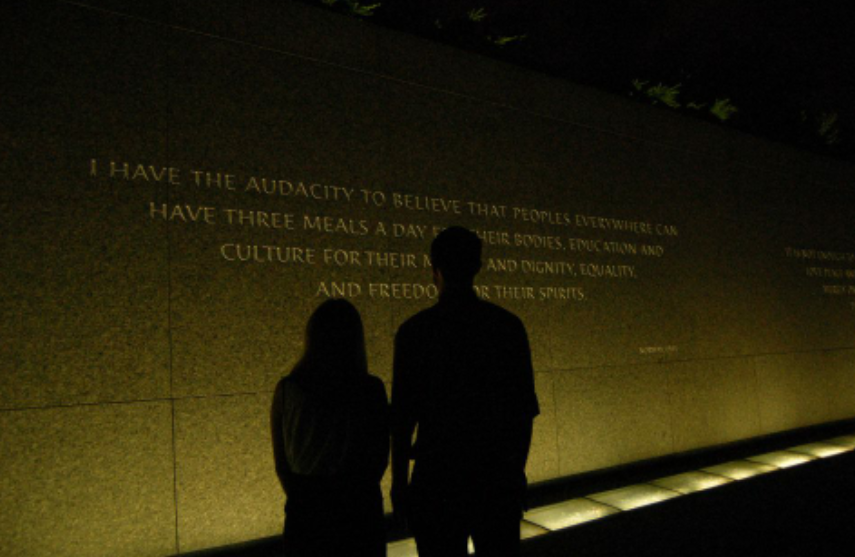 “Out of the mountain of despair” stood the monument of Martin Luther King, Jr. carved into “a stone of hope” and illuminated by the lights that divided the rock from the June night. The other fifty state representatives at the 2015 Al Neuharth Free Spirit and Journalism Conference and I strided along this part of the National Mall, taking pictures–like the tourists around us but with more journalistic flair–and reading King’s quotes along the granite wall surrounding his statue.

The photo above, taken by Arkansas representative Camden Metheny, shows Tennessee representative Aziza Cunningham and me pondering on one of the quotes, which came from King’s Nobel Peace Prize acceptance speech on December 10th, 1964 in Oslo, Norway. It read: “I have the audacity to believe that peoples everywhere can have three meals a day for their bodies, education and culture for their minds, and dignity, equality and freedom for their spirits.”

Months after the conference, when I prepared to share my experience about those great five days, I thought back to Metheny’s photo. At the time I didn’t understand the significance of the quote, but now I see its ending line corresponding with the conference’s message of “free spirit.”

The entire experience, in fact, could be held to this quote right down to the “three meals a day.” Lunches and dinners, whether inside the Newseum’s conference room or in nearby restaurants, were served with food of such epicurean quality which made it hard not to choose entrees from the fish in crazy water to the tarts at the other end of the buffet table.

There was also education, and with education came culture. Over these meals, we were visited by speakers including PBS Newshour co-anchors Gwen Ifill and Judy Woodruff, Vietnam War photographer and former Secretary of the Press Ron Nessen, and Mary Pilon, a conference alumna and author of The Monopolists (autographed copies of this novel and others were provided by the conference staff and sit in my personal library).

We journeyed around the D.C. area, sightseeing at monuments, visiting two time Pulitzer Prize photographer Doug Mills in the Capitol, and touring the USA TODAY newsroom and NBC Studios, where we saw a live taping of Meet the Press. We took a cruise on the Potomac (complete with a DJ and pizza), listened to a live performance of Freedom Sings, and danced the night away before we rested for our departures home.

After all of this, there’s still “freedom for their spirits.” Although my fellow representatives–my friends for what feels like ages–had varying and developing definitions for “free spirit,” we knew that, whatever it was, it connected us with stronger bonds than our interest in journalism.

Al Neuharth, the visionary and media mogul for whom this scholarship was named, gave his own meaning in his book Free Spirit:

“In my book, free spirits dream, dare and do. A free spirit can be a risk-taker, a visionary, an innovative leader, an entrepreneur, or a courageous achiever who accomplishes great things beyond his or her normal circumstances. Free spirit is individualism. Original thinking. Saying no to the status quo. Looking for better ways to learn and to live. To succeed and to share.”

Neuharth gave awards of free spirit to those in many categories, including politicians, TV personalities, businesspeople, coaches, athletes, social reformers, astronauts and reporters. Each took what they did best and caused quakes.

I feel honored that the conference staff saw these qualities within me and accepted me in. To be with the other fifty free spirits, too, made it amazing to know I could be counted among them.

I’m grateful for my journalism advisor, Teresa Hall, for letting me know about the scholarship and encouraging me to pursue it. I also thank Miss Hogge, my former yearbook advisor, for providing her recommendation and also giving me experiences to grow.

I praise God for whom I prayed to during the application process, asking for a chance to make it. I know it was by His power that my wish became a reality.

It feels wrong to sum up my experience in a few short paragraphs, without much excess, because those were some of the best days in my young adult life. It left me inspired, joyful, and confident in my future, with or without journalism; it was my stone of hope out of the mountain of despair.