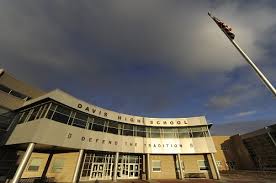 “My friend from Spain said that he was worried about coming to Utah because he thought he was going to get judged by what his sister wore or the fact that he drinks. Because it’s totally normal for kids in Spain to start drinking when they’re fourteen, but that would never happen here,” junior Ruby Dopp said. “So I think that people just don’t have enough experience with the world outside our little bubble.”

Although the term “cultural bubble” is used many times in social media and conversation, there is not an official definition.

There are some pros to living in a bubble, such as a sense of security and good influences, but there are also advantages to broadening one’s horizons.

“I think that it’s a good bubble, but I’ve really enjoyed to be able to get outside of it. I’ve gotten to experience other things, meet other people and hear what they have to say about the other side of the world,” Dopp said.

Students who have had the chance to visit the world outside of the bubble are able to notice a few major differences.

“Kaysville is a lot more strict. It’s a lot more controlled. Everywhere else I’ve lived, nothing is really enforced, like rules or anything. It’s more loose and free flowing. Which, sometimes, is not always a good thing,” junior Braydon Pinder said. “Mormons do have high standards, I think. And that’s a big reason for it. People just don’t get out. They get comfortable where they are, and so they don’t feel like moving anywhere.”

Some have the opinion that many times when people live in a cultural bubble, they fall into a sense of security. This sense of security is quickly threatened as soon as a new influence is introduced and that makes people uncomfortable.

“People don’t really like when things are ‘abnormal’ because it makes them uncomfortable,” junior Sarah Dennis said. “It’s not normal, it’s new. It’s not something that’s been around for a long time. And they’re afraid to test different things.”