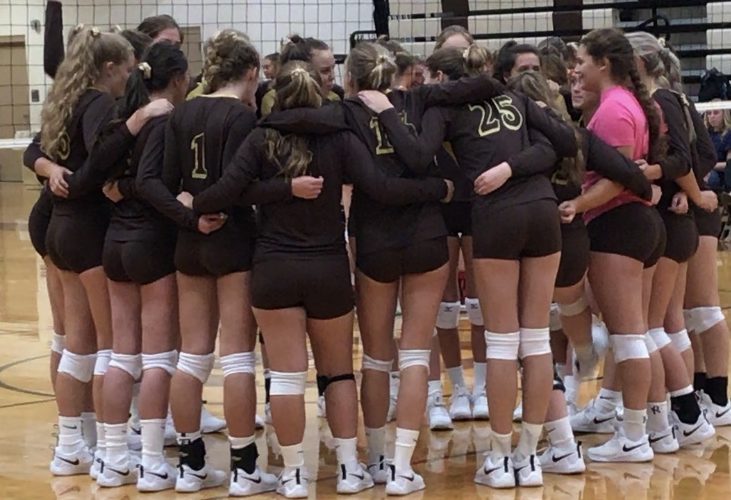 School starting signals the start of many sports. Volleyball is one of these sports. Their main goals for this season are to win region and state, and have fun doing it.

So far they’ve had a great start, taking second place at the tournament they hosted on Saturday, August 25. The girls played a handful of teams, within the district and more, losing only to West High School. While their ranking in that tournament looks promising, it is too early in the season to tell. “There is always that one team that can come out of nowhere,” says head coach Salvo. However, Julia Last, the manager, is optimistic about their placement. “I feel like if we work hard and try our best, then we have a really good chance of winning State.”

However, they’re not getting through the season on hopes and dreams. “We train competitively. We like our girls to practice like it’s a real game,” says Salvo. The coaches have a point system set up during practice. Whoever earns the most points each week gets a starting spot in the game. Once the game gets going, they also have to prove that they can stay in. According to coach Salvo, the benefit of the point system is that its measurable, organized, and it gives everyone a chance for the starting spot.

They had their first game of the season on Tuesday, the 28, against Bountiful High School. The start of the game was promising, with them racking up points quickly. They won the first match, 25 to 19. The second match, however, didn’t quite go their way. Bountiful quickly got ahead at the beginning. While Davis was able to catch up, it remained a close game until Bountiful scored those 3 winning points. Davis lost, 22 to 25. The third game was a strong win for Davis, 25 to 19. However, Davis ultimately lost to Bountiful, with Bountiful winning 3 out of 5 games.

The girls credit this loss to lack of communication, which is a key factor when working together as a team. While it’s discouraging, the girls have a chance to redeem themselves at their game on Thursday against Viewmont.