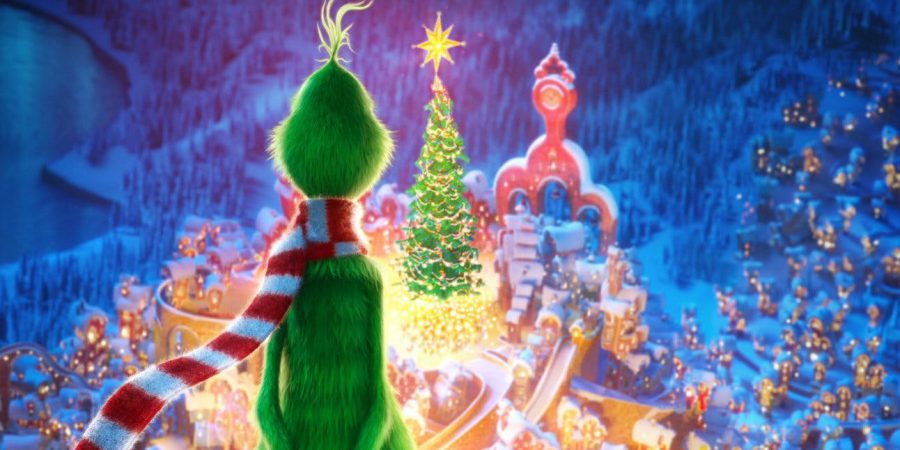 Chuck Jones’ original short film adaptation of Dr. Seuss’ How the Grinch Stole Christmas! has become a staple of the holiday season, and for good reason! It stays faithful to the book’s morals and simple plot, and adds amazing voice acting and charming animation. This is the kind of adaptation that Dr. Seuss’ wanted. He never wanted the safe and marketable full-length adaptations that we are getting today. From Mike Myers’ abysmal Cat in the Hat movie, to the surprisingly charming and entertaining Horton Hear’s a Who?, to the hellspawn that is the painfully ignorant and ironic Lorax movie, Dr. Seuss adaptations have had a rocky road to say the least. Now Illumination (the people behind the war-crime that is 2011’s The Lorax) is tackling the Grinch. I was really looking forward to hating this movie like I do the Lorax. I was very disappointed.

This movie is MUCH better than I expected. However, because of my rock-bottom expectations that I had going in, that’s not saying much. This movie has many problems, but the fantastic animation and voice cast make this among the best of the Dr. Seuss adaptations. It is a lot of fun to watch the animator’s imagination go wild with the various gadgets and gizmos that the Grinch uses (spoilers) to steal Christmas. Every structure in Whoville, every decoration on every wall, every tune playing in the background, (with a few exceptions) and every merry line spoken by the Whos screams Christmas. The unabashedly Christmasy feeling that this film gives off is the film’s greatest strength, and the reason I could see this being played constantly in the background of many holiday get-togethers. The voice acting is also top-notch, and they elevate the mediocre script. Keenan Micheal is especially funny as the happiest Who in Whoville. Cindy Lou Who’s small part in the original is promoted to a full on B-Plot in this movie, and it works! … Most of the time. Cindy Lou Who is unrelentlessly adorable, and her mission to give her mom the happiness that she deserves is a wonderful message. After the movie, I even saw an adorable young girl give her mom a big hug and say “Thanks for everything mommy!” That’s pretty cool, and the Grinch movie did that.

Even though I liked this movie overall, no movie is without its flaws, and The Grinch has a sleigh-full. The character design lacks creativity and borders on downright ugly. This is no surprise when it comes to Illumination, but it is especially disappointing in a Seuss flick. Fred the Reindeer is a pathetic addition that awkwardly shoves its way into the movie, makes a couple of fat jokes, does unspeakable things with whipped cream, and then awkwardly shuffles off. He is in the movie for a good 15 minutes and does absolutely nothing to advance the story. It is the strangest thing! I’m glad he wasn’t in the movie too much, but his absence from the majority of the movie is almost haunting. Did I miss something? Why is he in this? Will his giant, glazed over eyes be the final thing I see before I die? I hate Fred the Reindeer! The Cindy Lou Who subplot is also too long and too repetitive. It feels like each scene is a slight variant of the last. The worst thing about this movie is the narration. Because the movie is much longer than the original, there is more narration. This would be fine if the rhymes didn’t make me roll my eyes so hard that they detached from my eye sockets and fell into my drink. The rhymes are such a stretch and so embarrassingly bad, that I wouldn’t be surprised if the screenwriters 5 year old daughter wrote it. Even then, it would have more personality! It doesn’t help that Pharrell Williams is mono-toning the entire thing! The Grinch himself is also very muted. Instead of the angry, twisted, almost scary original, Benedict Cumberbatch’s Grinch is just kind of a dick sometimes. This is a very safe choice that is disappointing to say the least.

This movie, while deeply flawed, is a perfectly fine option for any family during the holiday. It isn’t a must see, and some jokes will make you groan, but you won’t mind sitting through this one. Who knows? Maybe you’ll get a kick out of it! (Also, there is a chalkboard joke that got a legitimate laugh from me. It’s choice.)

I give The Grinch a C.